401(k) Distribution: The Decade Just Ended – First in a Series 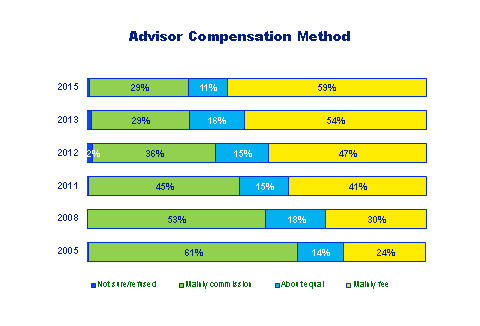 Probably not, and the looming DOL fiduciary regulations may well move the wall.

Unsurprisingly, the shift to fee-based compensation had its impetus among Heavy advisors (those deriving 60% or more of their income from 401(k), 26% of all 401(k) advisors).  In 2005, 25% of Heavies were mainly fee-based, virtually the same as all advisors.  By 2008, however, Heavies were 40% fee-based even as 30% of all advisors described themselves that way. Heavies continued to lead the pack through the decade; today they are fee-based versus commission-based by 68%-22% (all advisors are 59%-29%).

Commission-based compensation may already have hit an irreducible minimum among Light advisors (those deriving less than 20% of their income from 401(k), 45% of advisors).  Although the proportion of Lights describing themselves as mainly fee-based edged up two points between 2013 and 2015, so too did the share describing themselves as mainly commission-based (“about equal” went down). The new regulations may make the 401(k) business less attractive to these advisors.

That leaves Medium advisors (20% to less than 60% of their income from 401(k), 29% of advisors) as the remaining driver of fee-based growth. They indeed have some room to expand into the fee-based space inasmuch as only 52% of Mediums are mainly fee-based today; 35% are mainly-commission-based and 13% are about equal.  It’s not a leap of faith to see 15 points or so of that combined 48% morphing into fee-based reasonably soon, even without encouragement from the feds.

That, of course, is predicated on our expectation that Medium advisors remain committed to growing their 401(k) practices and that the pool of specialist advisors will in fact grow over time.  On present trend and under current policy, it’s easy to imagine the share of 401(k) advisors who are mainly fee-based hitting the two-thirds mark.  Under the proposed fiduciary regulations, of course, it’s possible to see it going much higher, partially because those advisors who remain committed to the business will get with the program and others may exit the business altogether.

Our first Retirement Services Intermediaries study launched in 2000; these findings are based on selected waves carried out between 2005 and 2015. RSI studies are conducted by telephone, typically among a representative cross-section of 600 or more advisors deriving income from 401(k) plans. RSI 10 is scheduled for delivery in April, 2016.