Vanishing Distinction: 403(b) Advisors Take on Other DC

Topics in 403(b) Distribution: first in a series

401(k) advisors troll the for-profit ponds while 403(b) advisors cast their lines into not-for-profit waters, right?  Well, not exactly.

Updating our seminal 2012 study of advisors who sell 403(b) plans, we once again find that 403(b)-active advisors actually derive a significantly greater share of their income from 401(k) (32%) than from 403(b) (21%).  Indeed, advisors’ share of income from 403(b) is virtually unchanged over the past four years, if anything drifting down slightly. 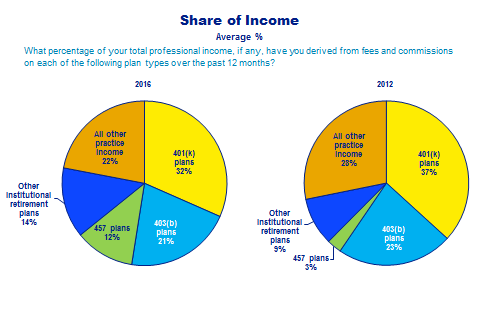 Up sharply over this period, however, is income associated with 457 and other institutional retirement plans, more than doubling from a combined 12% four years ago to 26% today.  401(k) and other practice income are down somewhat.

These and other findings from the new study reflect a growing focus on institutional business on the part of 403(b)-active advisors, three-quarters of whom now sell defined benefit or cash balance plans as well as non-qualified deferred compensation plans (57%) and cases of combined DC and DB plans (47%).  The new 403(b) advisor is a very different breed from that of just a few years ago.

But it comes almost entirely at the expense of retail business; even these 403(b) specialists derive lots of income from 401(k) (31%) and 457 and other institutional retirement plans (22%).