Topics in 403(b) Distribution: Second in a Series

Five years ago the 403(b) distribution channel resembled 401(k) in that about half the advisors were “occasionalists” (Lights in our parlance) and about a quarter were specialists or Heavies. Transitional or Medium advisors made up about a quarter of both the 401(k) and 403(b) channels. Those proportions obtain today in 401(k); indeed they have barely budged in nearly 20 years. 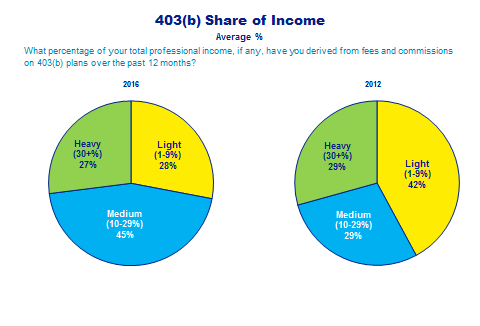 A contributing factor may also be spin-offs from 403(b) relationships—rollovers, investment products and business services sold to plan participants or executives at plan sponsor organizations.  In 2012 only 66% of 403(b) advisors reported such spin-off income, the figure today is 100%.  And the median contribution to practice income from 403(b) spin-offs has tripled, to 15%.