Topics in 401(k) Distribution: Second in a Series 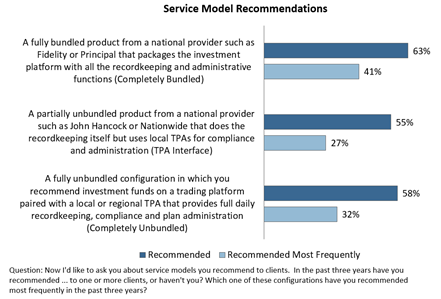 Unusually in the fluid world of 401(k), these relationships haven’t changed much in the last few years. But will it last?

The period to 2012 saw major upheaval as advisors (mainly RIAs) and TPAs brought their novel unbundled offering to market. But the completely unbundled approach never really grazed traditional, fully bundled plan architecture—the main casualty was the TPA interface service model which was already in slow decline. By 2012, advisors were almost evenly divided among the three approaches.

In the years since—and punctuated by virtually no change in 2017—the fully bundled model has led the pack as the TPA interface model has continued to lose steam. If, as we once thought, the fee-only RIAs driving the completely unbundled approach are the advisors of the future, so too should be their service model of choice. And that may turn out to be the case. But traditional bundled service delivery remains surprisingly durable from an advisor standpoint, in no small part because of its seamless accountability and often rich array of services and customization. 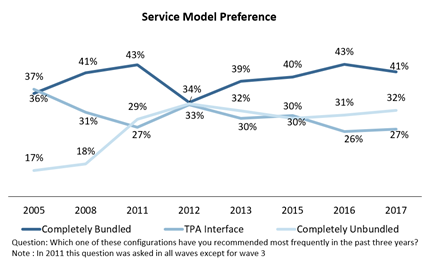 What is changing under the hood is how TPAs themselves come to the 401(k) market—less today in a compliance and administrative partnership with a national recordkeeper and more in a recordkeeping capacity themselves in partnership with a local RIA. A dozen years ago, 54% of advisors preferred a service model which involved a TPA, the figure today is 59%. Look to RIAs and TPAs, more than national platform providers, to stir the service model pot going forward.

Retirement Services Intermediaries studies were launched in 2000 by Brightwork Partners LLC; Brightwork was acquired by NMG Consulting in 2017. Findings are based on selected RSI waves carried out between 2005 and 2017. These studies are conducted by telephone, typically among a representative cross-section of 600 or more advisors deriving income from 401(k) plans. RSI 12 is scheduled for delivery in mid-2018.

Our Library of Insights: Trusted by industry leaders.

Follow NMG Consulting on LinkedIn and be the first to read our latest insights and company news.