In the heat of the tax reform debate last fall one trial balloon hovering over Capitol Hill was the full or partial “Rothification” of 401(k) contributions. ‘Nobody maxes their contributions,’ the argument went (close to true, it’s under 10%) and ‘Nobody will notice if they are contributing on an after-tax instead of pre-tax basis anyway.’

Defined contribution participants are famously inattentive, often ill-informed and notoriously beholden to inertia–but they are not stupid. Yes, they would notice. 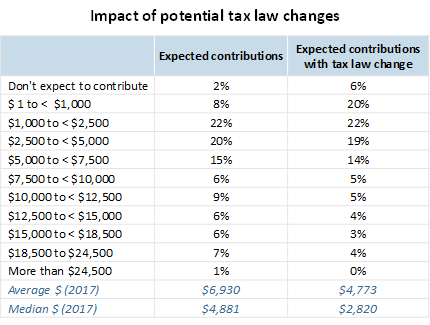 Excluding employer contributions, DC participants expect to contribute an average of about $7,000 to their plans in the year ahead. Asked what they would expect to contribute if they could no longer exclude their contribution from taxable income, the figure drops by more than 30%, to less than $5,000. The attrition is proportionally similar across plan types (401(k), 403(b) and 457) and doesn’t vary systematically by balance. But it does hit the lowest income households hardest. For active participants in households earning less than $50,000 per year “Rothification” could cut DC contributions by 40%.

Is this really the time to be undermining America’s dominant retirement funding vehicle?
In fairness, real world results are likely to be less dramatic than laboratory results in a survey research setting. But the direction of the impact is unambiguous and negative. Let’s hope we’ve seen this last of this bad idea.

Voice of the Defined Contribution Participant (VDP) studies were launched in 2010 by Brightwork Partners LLC; Brightwork was acquired by NMG Consulting in 2017. Findings are based on selected VDP waves carried out between 2010 and 2017. These studies are conducted online among nationally representative samples of active 401(k), 403(b) and 457 participants.

Our Library of Insights: Trusted by industry leaders.

Follow NMG Consulting on LinkedIn and be the first to read our latest insights and company news.