Graduating to Higher Ed, the New Focus of 403(b) Advisors

Topics in 403(b) Distribution: Third in a Series

To the litany of 403(b) advisor transformation over the past five years add shifting plan sponsor focus.

The biggest loser is public K-12 403(b) plans, by far the 403(b) sector of greatest advisor focus in 2012.  Today it ranks fifth in importance to advisors among six sectors tested, ahead of only charitable or religious organizations (itself downgraded from 3rd place in 2012). 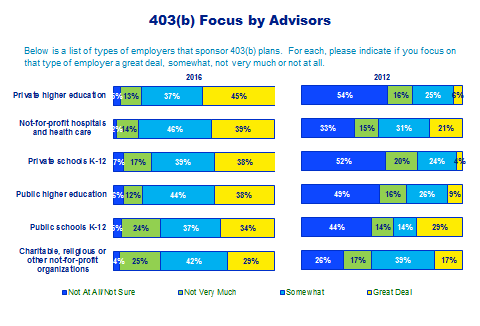 The biggest winner is private higher education, top ranked as worth a great deal of focus today, up from fifth place in 2012. Private K-12 is up as well, to third from sixth place.

Light 403(b) advisors (those deriving less than 10 percent of their income from 403(b)) devote their energy to the not-for-profit hospital and health care sector with only scant attention to private education.  But Medium (10% to <30%) and Heavy 403(b) advisors (30%+) overwhelmingly turn their sights to private higher ed.

Advisors are clearly gravitating toward sectors of the 403(b) community offering opportunity—which less and less include public K-12 plans.