NEST was established in 2010 to support pensions auto-enrolment, a public sector provider which would ensure every employer could access a workplace pension scheme for their employees. However, for a scheme seen by industry as a backstop, it now has many members with around average or better incomes, and material account balances.

The second edition of the Vanguard–NEST “How the UK Saves” report contains a wealth of data about NEST, its supporting employers, and members. NEST has typically been seen by the pensions industry as something of a backstop to ensure that all employers and auto-enrolled employees enjoy a minimum level of quality in workplace pensions. Many have assumed that NEST members would comprise almost universally low-income employees, which other workplace pension providers would find unappealing.

This assumption is also often made (incorrectly) about the members of the industry funds which have performed a similar role in the Australian market. While many industry fund members do indeed have low incomes, most Australian industry funds have a minority but important segment of members with average or higher incomes, and high account balances.

As more data becomes available (such as the new Vanguard–NEST report) a similar direction of travel appears to be occurring in the UK. NEST now has a lot of members around average or better incomes (UK average earnings for 2018-19 were slightly more than £27,000):

The reported earnings for inactive members are not hugely different. That said, presumably many NEST members don’t report their income, so this data may over-state the proportion of NEST’s members in these earnings bands.

However the broad picture is supported by NEST contributions data shown in Figure 1 below. 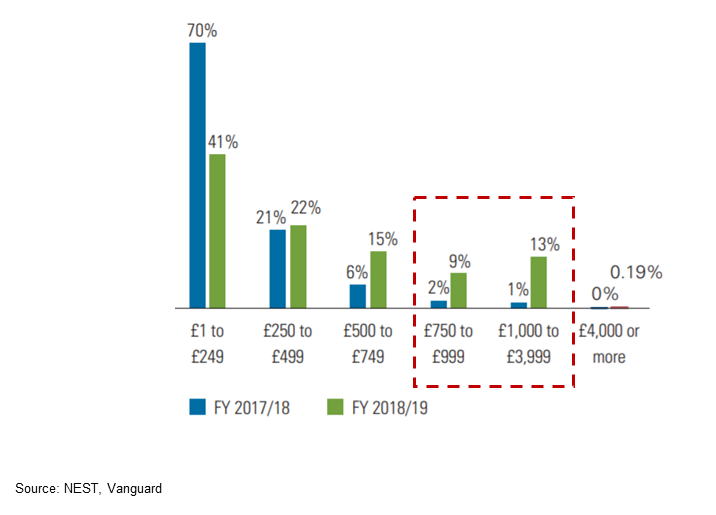 Assuming an average contribution rate of just over 5% (a small percentage of employers contribute above the minimum level), this confirms a material segment of NEST members around average or better incomes. In terms of sizing this segment, NEST had 4.2m active members at the end of March 2019, implying:

Overall this indicates a segment of at least half a million NEST members who are likely to be attractive to competitors. Higher contributors may also be paying significantly more in fees (given NEST’s fee model) than they would elsewhere.

So is this a competitor opportunity? Yes – if it can be accessed, which is not simple. The Corporate IFA intermediary channel has exposure, but this is relatively limited. Much of NEST is both SME and direct channel. Many SMEs enrolled directly, do not use an intermediary for reviews, and make their own decisions to stay or switch.

We are seeing much more activity in the SME direct channel as customer experience issues (usually) overcome employer switching barriers, but the criteria for success in SME direct restricts how many competitors can utilise it in a big way. However for those which can, NEST may prove to be an unexpected source of attractive switching business.