DC workplace pensions are highly intermediated. Most pension schemes are chosen by employers with help from an EBC or a Corporate Adviser. Even when employers deal with providers directly –typically SMEs – the common theme in workplace pension selection is that those who ultimately benefit from the pension – the members – don’t do the choosing.

Based on evidence seen in the Australian market, key staff members will become influential in their employer’s choice of pension provider. For now, consumers can have their say (or vote with their feet if the experience has been unsatisfactory) when they find themselves with several pension pots and a decision about where to consolidate.

Of course, many of those thinking about consolidating will not proceed – there is always a gap between intention and action – especially if they don’t have an adviser to take care of the details. It remains significant, however, that over half of workplace pension members are in scope for consolidation activity.

If we dig into the profile of those members who have consolidated, we find that nearly half (47%) consolidated into a workplace pension rather than an individual pension – that is deep penetration in a relatively short space of time.

Individual pensions are losing market share to workplace, but are mostly retaining their higher value customers – at least for now: 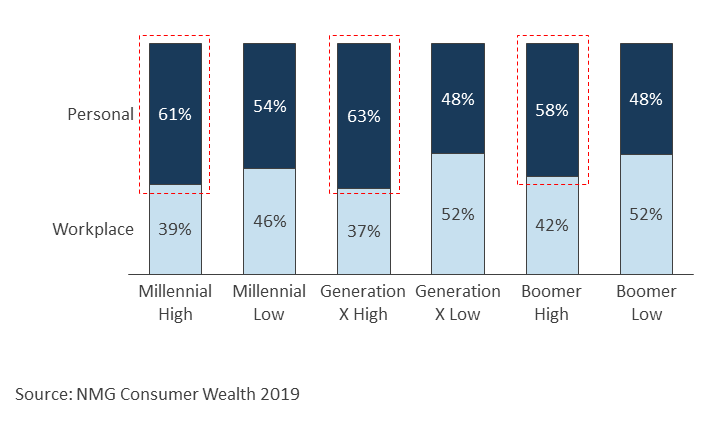 Most workplace pension providers have another advantage in covering more of the product spectrum. They also participate in individual pensions by offering a link to advice (Figure 2 shows that 39% of members who consolidated did so via a financial adviser), and a multi-wrapper or pension-only platform for advisers. While this business typically moves to a different internal P&L, it at least stays in-house and has a significant impact on overall flow retention.

What about the non-advised members? For this segment, consolidation drivers are a good online and service experience, and the convenience of having all investments in one place. Very few workplace providers as yet offer a strong D2C experience, so this is where banks and D2C platforms have a sweet spot.

Figure 2: Adviser influence on consolidation
By type of destination pension 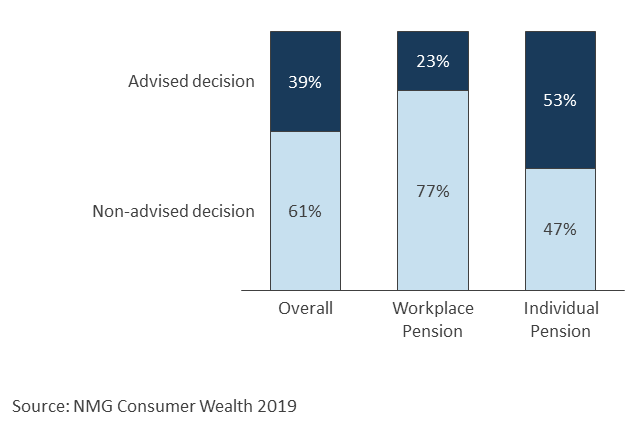 Individual pension providers without a workplace proposition have some important decisions ahead given that most rely on flows from the workplace pension system in some form. That business model which has been so successful in the past may be more seriously challenged if workplace providers sort out the customer journey for their members.

That won’t be for a number of years at least – most workplace providers have a lot of customer journey work to do, including widening the range of investment options and wrappers, and developing content and guidance for members with widely varying levels of knowledge. They will improve over time to levels which are good enough for many of their members.

While developing a workplace proposition is the obvious defensive play for banks, D2C platforms and asset managers, this is an intensely competitive and often unprofitable category which makes entry a daunting prospect. However, given the increasing size of the workplace asset pool, and the way in which it feeds the wider UK wealth eco-system, it’s essential to have a participation strategy (whether direct or indirect), especially if you already have scale or a vertically integrated model.

Which providers are winning or losing out the consolidation battle and why? Subscribers to our Consumer Wealth study can access the answers to these and other questions around workplace pension consolidation.
For more information, contact: